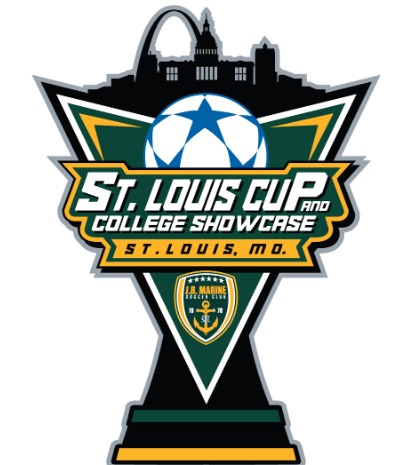 The St Louis Cup and College Showcase brings quality competition both locally and from out of state! Open to Boys and Girls Teams ages U9-U19. This year we will be partnering with the Select Clubs National Showcase League (SCNSL) that will bring up to 84 teams from out of town and a large group of College Coaches.

Games will be held at Creve Coeur Park Soccer Complex, a World Class all turf facility.

Player & Team Eligibility - Documentation
Player and Team Eligibility The tournament is open to competitive select teams and all players must be registered with USYSA, US Club or USSSA and their respective state associations and have current player ID cards with picture.

All teams from outside of the state of Missouri must have a travel permission form from their respective state association. Required documentation: player cards (USYSA, US Club, USSSA), your state association approved guest player loan forms (if applicable), copies of the state or National Associated verified roster and a notarized copy (if applicable) of medical release form for each player must be presented at registration.

J.B. Marine SC will keep a copy of the state roster, guest forms and travel permits. Medical release forms will be reviewed and returned. The tournament will follow the newly implemented U.S. Soccer guidelines pertaining to field ranges and roster size.

In some cases ‘Trapped’ players will be allowed to play with teams, 1 year younger, up to the amount of players allowed in the tournament guest player policy.

The following items are to be scanned then emailed to the tournament:
1.     Official State Roster
2.     Travel Permit (if applicable)
3.     Guest Player Forms (if applicable)

If teams are unable to complete the electronic pre-check in, they are required to check in onsite at the tournament one hour prior to their first game.

After the team is checked in they must report to their field and check in with the Field Marshall 20 minutes prior to game time for card review.

All identification cards will be collected and reviewed, prior to the game by the Field Marshall. Cards will be held during the game and returned after the game.

Uniforms
All players except the goalkeeper must have a numbered jersey that has a different number from all other team players.

The team listed first will be considered the “home team”. The home team should wear white or light colors, and will be required to change jerseys in case of a color conflict (as determined by the referee). Home teams will be responsible to supply the game ball.

All equipment shall be subject to the referee’s approval. All fans must sit on the opposite of the field as the teams.

Any player or coach who receives a “red” card shall not participate in the next scheduled game. Ejections will be reviewed by the tournament officials, who reserve the right to lengthen suspensions based on the nature of the offense.

Scheduling
Scheduling shall be the sole responsibility of the Tournament Committee.

The Tournament Director may change the duration or length of games, subject to the following:
A.     Inclement weather
B.     Delay from relocation and/or rescheduling of any games
C.     May cancel any games in the preliminary rounds which have no bearing on deciding group winners
D.    May modify rules for tie breaks due to inclement weather delays.

All ages will play a 3 game format.

Point System
The following point system will be used to determine winners within each division throughout preliminary games:

Tie Breakers
There will be no finals or shootouts in the event of a tie. All teams will play 3 games.

The center referee and an official from each team must sign the game report. The game report will be used for score verification.

Player’s and coach’s cards will be retained by the tournament director and returned after the suspension has been served.

Protests
Protests may be made only by the designated coach. Protests must be submitted in writing and submitted in duplicate with $100 cash to the Tournament Director. No protests will be heard concerning judgment calls made by all referees. Any protest concerning player eligibility must be made prior to the start of a game by notifying the Field Marshall and Referee. All protests must be made within 60 minutes after the end of the game in question. Protests will be ruled on by the Tournament Committee by the start of the participants’ next game.

The protest fee of $100 is not refundable if the protest is not upheld. General Rules

Bringing of personal alcoholic beverages on tournament fields or at tournament facilities will not be allowed.

Entry fee deadline is 1 week prior to start of the tournament kick off date. Teams which withdraw after acceptance will forfeit their entry fee.

Complete cancellation of the tournament shall result in a refund of 50% if no games are played unless due to a COVID shutdown by St Louis County Dept of Health in which case a 85% refund will be provided.

Are you looking for a personalized club experience for your son or daughter, one that focuses on developing the player on and off the field? If so, we would love to discuss what makes JB Marine Soccer Club different and how we are working to change the Club Soccer landscape in St Louis through “Player Centered Development.”